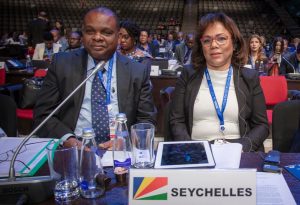 Victoria, Mahé (Seychelles) – September 27, 2019 (travelindex.com) – This week Seychelles will join the Community of Nations to celebrate Tourism Day 2019. As a country where tourism is, and one where tourism will remain for years to come the pillar of its economy, it is not only important for Seychelles to recognise Tourism Week, but that we do all we can as a people to appreciate its importance. This year a Tourism Festival will be held, a Tourism Ball and as has been the case for the last couple of years past players in the tourism trade will have their names positioned at the Seychelles Tourism Pioneers Park at the Tourism Academy.

Among the names chosen to mark this year’s ceremony was my dear father Karl St.Ange who had joined the tourism industry at the very start with his Cabanes Des Anges Hotel on La Digue. He was a pioneer indeed who moved into the industry just after the opening of the Seychelles International Airport.

This week the world of tourism will have its eyes on Nigeria as tourism professionals and experts meet to discuss different faacets of this important industry. With the African Union as a standing body participants from as far as the Caribbean will join counterparts in Africa and the islands of the continent. The official opening ceremony of the 15th Akwaaba, African Travel Market 2019 took place on Sunday the 22 September by Nigeria’s Father of Tourism, Chief Mike Amachree. Today Monday the 23rd and on Tuesday the 24th September delegates will take to the floor for this 1st Africa Diaspora Tourism Conference before the attention is turned to meet the selected “Africa Travel 100 Global Personalities”.

It is indeed a great honour to be invited to be a guest speaker at this 1st Africa Diaspora Tourism Conference and to have been listed among the finalists for the Africa Travel 100 Global Personalities for the World of Tourism.

The world was mobilised to say “Together we are changing the world”. Estimated figures say 400’000 across Australia, 100’000 in Berlin, 100’000 in London’ 50’000 in Hamburg and Hugh numbers everywhere in the USA among many other countries where the call was heard. The Climate Change Students are fighting for their world, and they want to save their planet. We’re just living it…

As the youth of the world were marching to save their planet, in Seychelles the eco-friendly island of La Digue has seen the arrival of two big diesel generators that have been plunked right in the centre of the commercial side of the island and just next door to tourism establishments and just a stone through to the beach.

La Digue has for many years been seen or pushed as the eco-friendly island of Seychelles. Policies and new regulations implemented are said to be guiding the island towards sustainable tourism though with major areas of concern for the Diguois islanders and in achievable outcome.

A test case on the island and for the island is the arrival on La Digue of two big electricity generators plucked right in the commercial heart of the island after the electricity underwater cable from Praslin was damaged right in the middle of the 15th August festivities. For obvious reasons the easiest temporary area for placing the generators were at ‘Dan Goulo’ because of the feeder cable from Praslin. Today, a month later the temporary location is still the electricity power station for the island and this at a cost for every Diguois.

Guests from hotels and restaurants next door are walking with their feet to show that this is not the La Digue they booked. But sadly the easiest course of action is to let everyone get used to the electricity power station instead of moving the generators where they would not be seen and heard and the obvious place on La Digue is close to the dump site at L’Union Estate. Should it have taken so long?

PUC Staff at La Digue
The staff at the power station are doing their job with total satisfaction and are devoted to providing power to the island. Generators are operated based on the load factor required before the second machine is put in service. Today an estimated 6000 litters of diesel old is being burned daily by the new La Digue generators.

Power surges
Consumers on La Digue are facing surges in the power supply and many electrical equipment are just unable to cope and the consequences of these regular power surges and are breaking down. A walk around La Digue will alert everyone that the situation on the island needs attention and the Diguois islanders need to be heard and assisted today and not tomorrow. Breaking down of electrical equipment is an added cost burden for households and for local businesses.

Seychelles should not allow itself to get used to the ‘status quo’ on La Digue because this is dangerous for the long term survival of the island’s economy.

Spin the globe, pick a spot and odds are good you’ll alight on the color blue: 71% of the Earth’s surface is covered with water.

Vast stretches of ocean spread from the edges of the continents, and what lies between the coasts is true wilderness. Far from terrestrial plants and light-filled shallows, the open ocean makes no accommodation for human comfort or survival.

Islands are the exception. These widely scattered landing places offer respite in the form of fresh water, abundant food and the occasional fruity cocktail.

Maybe that’s the travel secret behind the evocative power of beautiful islands. Like the rainforest-cloaked island of Kaua’i, some are the summits of drowned volcanoes, smoking and burning above the waterline. Others, such as the Seychelles, are the scattered shards of continents, while atolls are coral crusted over a sinking landmass.
Every single one invites travelers to leave familiar shores behind.

From Norway’s Arctic reaches to the sunny reefs of Palawan, these beautiful islands span latitudes, climates and cultures.

Whether you’re dreaming of a beachy escape or plotting a course for the edges of the Earth, these are the world’s 10 most beautiful islands:-

Denis Private Island has implemented the first phase of a four-phase photovoltaic solar power system in a bid to reduce the island’s dependency on fossil fuels. With the installation of the photovoltaic panels, the island is reducing its diesel consumption by 100 litres per day.

In an interview featured in the St Ange tourism report, Denis Private Island owner Mickey Mason said: “While most photo-voltaic projects feed power back into a public energy grid, primarily because there is no grid, the challenges on Denis are considerably different.”

“The entire operation on the remote island – a 30-minute flight from the main island of Mahé – has had to be powered independently with its own diesel generators, making the switch to renewable energy a more complicated affair,” said Mason, adding that in collaboration with the German company DHYBRID the project has materialized.

DHYBRID specializes in designing total energy solutions in remote places and has carried out successful projects in Somaliland, South Sudan, Haiti and the Maldives.

Denis Island is the second northeasternmost island in Seychelles – a group of 115 islands in the western Indian Ocean. It is 60 kilometres north of the main island of Mahé and lies at the northern edge of the Seychelles bank, along with the nearby Bird Island, which is the northernmost Seychelles Island.

The island has been designated a cay, a small, low-elevation, a sandy island on the surface of a coral reef.

The solar energy project was implemented in partnership with local company Sun Tech Seychelles. The first phase saw the installation of a 104 kW solar array, together with the DHYBRID Universal Power Platform (UPP), which will serve as the foundation for the current and future integration of solar energy on the island.

Future plans to use more renewable energy will include an upgrade of Denis’ existing diesel generators, before the implementation of modern lithium-ion battery energy storage systems is put in place. This will replace the need for generators altogether.

DHYBRID chief technology officer Tobias Reiner said: “With the universal power platform in place, the island has an energy roadmap towards 100 percent renewable.”

“Denis Island is a beautiful and unique destination and we are very proud that our technology is now supporting the ambitious vision of the island towards a green and sustainable energy supply,” said Reiner said.

According to Reiner “Denis Island is a role model in sustainability and we hope that this installation will set a further example to other islands in Seychelles.”

“We’ve always known that in keeping with our mission for not just a sustainable hotel but a sustainable and self-dependent island, we would have to address the issue of power,” Denis Private Island owner Mason said.

“However, for us, it’s not as simple as putting a few panels on the roof. If we’re going to do it right, we had to have a structure that would allow us to gradually shift toward the new technology without disrupting our existing operations,” concluded Mason.

Denis Private Island as a tourism establishment is a leader in conservation and sustainability. The waters around the island have been designated as protected areas by the island nation government.

Apart from conservation programmes, the island’s overall administration places a lot of emphasis on sustainability, to reduce wastage and maximise what the island provides.

The island has an organic farm which supplies the resort with vegetables, fruits, meat and meat products as well as other products such as bread, milk, yoghurt, and cheese. Denis Island’ “farm fresh” products are also sold in its retail shop at Providence on Mahe.

The beautiful island of the Republic of Seychelles has been confirmed as the country to host the 63rd Commission for Africa Meeting (CAF) in 2020.

The decision was reached after member states at the 62nd Commission meeting held on the sidelines of the just ended 23rd UNWTO General Assembly accepted the request of the Indian Ocean nation to host the important gathering of African Tourism leaders.

The chairman of the Commission, Kenya’s Najib Balala, read out the draft resolution and after no objection from members, he went ahead to move the motion.

The Commission of Africa Meetings are held every year as part of UNWTO’s statutory events.

The UNWTO Regional Commission for Africa is the major institutional platform where ministries in charge of tourism discuss the latest trends of the sector at the continental and global level and the implementation of their program of work.
The country in conjunction with the UNWTO will announce the date soon.

The Minister of Tourism, Marine Ports and Aviation Hon. Didier Dogley, who was leading Seychelles delegation, said that “the island is looking forward to hosting the tourism community during the commission meeting.”