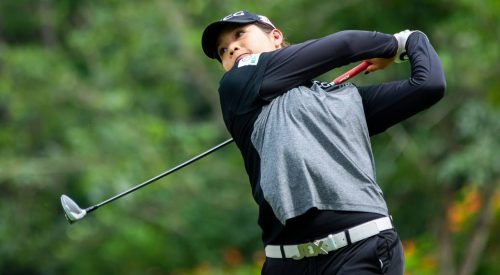 Pattaya, Chonburi, Thailand, May 10, 2021 / TRAVELINDEX / Ariya Jutanugarn became the first Thai player in the 14 years the event has been held  to win the Honda LPGA Thailand 2021 tournament after a drama-packed final hole at the Siam Country Club Pattaya Old Course today. Ariya won by one shot when former amateur champion Atthaya Thitikul missed a birdie putt on the 18th hole to force a play-off.

The victory had been a long time coming for former world number one Ariya, who first played the course as an 11-year-old and went close to winning in 2016. She finished with a nine-under 63 on the day for an overall score of -22. Atthaya was one shot back overall and carded a four-under 68 today.

“I’ve been waiting for so long,” said a teary Ariya after her victory. “I had good commitment and I hit a very good shot from the tee and second shot to the green.”

Ariya said the storm delay hadn’t been easy. “It was pretty tough because especially when they stopped playing; just my momentum is kind of like; I want to know the result.

Ariya had her sister with her and told her she thought she would go to a play-off. “Basically, I kept telling her I think I’m going to a play-off. She said no matter, I’m always proud of you. I really wanted to watch how she (Atthaya) played on that last hole, but my caddie stopped me.

“I’m proud of myself and just always very happy to be here. This means the world to me, because after 2013, one of my biggest dreams is to be able to win in Thailand, and I did. So thank you to all the fans who really gave me their full support. I will say this win is for you guys. Thank you.”

Thai golf fans had been kept waiting for their first champion at the Honda LPGA Thailand 2021 tournament today when a storm stopped play on the final hole.

As the last group of players, including 18-year-old Atthaya, started up the fairway on the final hole, horns sounded and play was halted for more than one hour as a storm approached and the players had to leave the course to avoid lightning strikes.

With Atthaya one stroke behind Ariya – who had already finished in the group ahead – and having hit a good approach shot from the tee, the nail-biting finish was suddenly put on hold until the storm cleared.

With the result in the balance, and two Thais battling for victory for the first time in the tournament’s history, local golf fans were left hanging on the edge of their seats for more than one hour until play resumed.

A smiling Atthaya had led over the final stretch until the final hole and had five birdies and one bogie up until the 18th.

Ariya, who almost won in 2016, birdied the first six holes and was two off the lead after 9 holes. But after 12 holes she was in second place, one stroke off the lead. Ariya missed a birdie putt on the 17th for a share of the lead.

The former world number one finished with nine birdies on the day.

Ariya’s brilliant second approach shot to the green on the 18th set her up for an eagle and the clubhouse lead on the final hole of the round, but it wasn’t to be as her putt slid past the hole. However, her birdie gave her a share of the lead with Atthaya, who was still playing the 17th.

She finished with a blistering nine-under 63.

Atthaya, however, had a three-putt bogey on the 17th, minutes after Ariya finished her round and put a lot of pressure on herself going into the final hole. It was her first bogey of the day.

Atthaya said even though she didn’t win, she was proud of the way she played. “This is a new experience having been so close to a win and in that last putt I just felt, okay, give me one good one and I’ll do the best I can,” she said after her round. I’m already proud of myself that I could do the best I can.

“I just told myself, do your best. Just focus on what you can control and then just do your best out there and enjoy every single moment of it. I’m very proud to be here and it’s always amazing to be in the Honda LPGA in front of all the Thai fans. They support us here and that’s amazing.”, said Atthaya

Earlier, defending champion Amy Yang of South Korea started strong and was 6-under after seven holes to be one off the lead. But the birdie putts stopped dropping for Yang on the back nine.

South Koreans Amy Yang – the defending champion and three-time winner – and So Yeon Ryu finished tied for third on -20 with America’s Angel Yin.

However, Thai players had dominated and stayed at the top of the leaderboard on the final day at the Siam Country Club Pattaya Old Course.

After 8 holes Thai players were first, second and third until the 12th, when Patty Tavatanakit three-putted for a bogey, dropping her back down the leaderboard to be tied for 6th. That left Atthaya and Ariya at the top of the leaderboard, where they stayed until the final hole.

Patty, who started her final round with a one shot lead, had a par on the 1st, while Atthaya birdied the 1st and 2nd to draw level with her. But she took the lead again with a birdie on the 5th.

Patty had started the day with a one-shot lead, but dropped back on the 6th with a bogie to be tied with Atthaya, the former number one amateur in the world. Then Patty had a horror hole on the 12th with a three-putt bogey.

After the unnerving double bogie, Patty had pars until she birdied the 17th, and by this time she had slipped back into a tie for sixth place.

It was a disappointing finish for the rising star, who had led the field in each of the first three rounds.

“I feel like I handled everything pretty well,” Patty told the media after the final round. “I just didn’t hit it great today. I grinded back to 2-under par again.

“I played eight rounds in Asia and I shot under par in all of them. I’m still pretty proud of myself.”

Amy finished her last round with nine birdies and one bogey for a 64. The three-time winner ended the tournament with a well-played 20-under par.

Another Thai player who had a brilliant final round was 21-year-old Pajaree Anannarukarn, who finished with a 9-under 63. Pajaree, who was the LPGA Rookie of the Year in 2019, had finished tied for 18th after her third round on -11 overall. She threw caution to the wind and came out swinging on the final round and finished in a tie for 13th.

The two lowest scores of the day were both by Thai players – Ariya and Pajaree.

Ariya’s sister Moriya finished tied at 17th after a round of 3-under to be -13 overall.

Ms. Winnie Heng, Vice President and Managing Director for Thailand at IMG, said, “Congratulations to the winner of Honda LPGA Thailand 2021, and of course a big thank you to all the golfers in the field for an amazing week of golf. The support and camaraderie amongst the women on this tour is phenomenal.  I cannot be more proud of this week’s leaderboard with four Thai players dominating across all four days, which captivated the whole country and had everyone rooting for their success.  This result is a testament to Honda and all the sponsors on their commitment to developing ladies golf in Thailand.

I would also like to thank our title sponsor Honda, and all our tournament partners for their continued support and trust in us. I would also like to acknowledge the Center for Covid-19 Situation Administration (CCSA), the Ministry of Tourism and Sports, and the Sports Authority of Thailand for their constant guidance in ensuring a safe and secure event was delivered.

This event is made up of an engine of staff and volunteers, who have worked tirelessly to stage this event, and I would like to thank every single one of them for their hard work and dedication. Of course, not forgetting our fans, thank you for supporting us from your homes – we miss having you here and I hope that we can look forward to welcoming you back to the grounds of Siam Country Club, Old Course, next year.

Through these challenging times, the tournament itself has been an embodiment of our tagline ‘Dream Big’, and we hope that it continues to inspire everyone who has a passion of golf. We endeavor to create more opportunities like the National Qualifiers, for aspiring young golfers, which we hope, will eventually propel them onto the world stage

We do hope that the staging of Honda LPGA Thailand this year, will pave the way for more international sports events to be staged in a safe and secure environment, here in Thailand and that it will further help promote sports tourism and golf tourism once again.

We look forward to seeing everyone again next year at the Honda LPGA Thailand 2022,” said Ms. Winnie.